I climbed a tree yesterday.

In a historical park.

I'd spent the afternoon there, alone, looking for some peace.  There are acres and acres of gardens, a military museum, a reflection point, running water, still water, flowers...but I saw this one stinkin' tree.  The only tree that had low branches sturdy enough to support me.  So what did I do?  My camera, which was around my neck, was carefully tucked into my jacket, my phone and water bottle went into my zipped pockets.

For just a moment, I felt like I needed to prove something.  To myself.

So I started climbing. 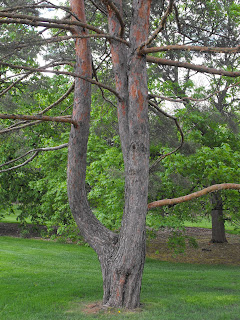 I had looked around to make sure nobody was in sight before I attempted it, but I'll be darned if I wasn't but 10 feet up when an elderly gentleman with tufts of white hair puffed out of his VFW cap pulled up in a golf cart and sternly addressed me as, "Young lady," before ordering me down.  I thought I was going to be escorted out of the park, but I wasn't.  Instead, behind thickly lensed glasses, I saw a pair of gently smiling blue eyes.

I was puzzled by his statement.

He grinned and gave me a sharp salute and a nod before driving off.

Whatever it is, whatever I'm looking for, it remains unfound.

Labels: Working On Me

I dropped a light bulb tonight.
This isn’t necessarily unusual for me, especially when considering how awkwardly clumsy I am in almost every area of my life.
It was a GE 40 watt soft light.  A regular old bulb, not a fancy, energy efficient one.  I admit, I’m polluting the world with my fondness for regular bulbs.
I dropped the bulb when attempting to put it into the light fixture over the kitchen sink.  I swear, it fell in slow motion, slipped through my fingers, past the helpless grasp of my other hand and I watched it bounce once against the rubber mat in the bottom of the sink before hitting the stainless steel with a sharp cracking sound.
I looked at it and at first glance, it was whole.  Lying on its side, it looked perfect, the glass smooth and untouched.  I knew it was broken, though.  There was a piece next to it that was whole in its brokenness with dozens of tiny shards around it.
My curiosity got the better of me and I picked up the bulb, turning it so I could see the hole and sharp edges.  One side perfect, one side damaged.  I turned it, contemplating its appearance, contemplating its functionality.  The base was still solid, the filaments still intact.  I knew I should throw it away, but I gingerly lifted it to the light fixture, turning it painstakingly so as not to cut my fingers on the jagged edges.  When it was secured, I took a breath and turned on the switch.
It worked.
It was broken and fragile, but it worked.  The part of the bulb facing out was whole.  The part facing back—the part that was hidden—was damaged.  But there was still a glow, a burst of light coming from it.
I flipped the switch off and carefully removed the bulb from the fixture.  One reckless move and I knew the rest of the glass would shatter, would separate from its base.  It would be rendered useless.  Placing it on a dish towel, I turned my attention to the broken glass in the sink.  Picking up what I could, I laid them out, turning them this way and that, arranging them as I would puzzle pieces.
Crazy glue.  Have you ever tried to crazy glue pieces of a light bulb back together?  I have.  Just this once.
Did it work?  Yes.  But no.
You see, once something is shattered, there are some pieces that are too tiny, maybe far too sharp, to ever be put back into the whole.  The tiniest pieces, the ones you can’t see at first glance and thoughtlessly run your fingers over?  Those are the ones that cut unexpectedly…the ones that cut the deepest.
You can piece together what’s left.  Turn it into something resembling what it used to be.
And the glue that holds the broken pieces together leaves jagged lines, thick scars that disfigure what should have been a smooth, simple surface.
But the light still shines through.  If you’re careful…if you connect it to what it needs to make it work…if you don’t push too hard or unwittingly crush it…it shines.
It may shine a little less brightly, may be slightly distorted because of the heaviness of the scars, but if you turn it just so, if you look carefully at the spaces where small pieces are missing, you can see inside.
And that’s where the light shines the brightest.  Not through the untouched, unbroken part that’s on display for everyone to see.  Not through the scars.  But through the raw edges, through the small parts that are so broken that they’ve left tiny, pinprick windows that reveal a fragile, but brightly lit core.
I learned that it’s not about fixing the bulb.  It’s not about putting it back together or trying to turn it back into what it used to be.  It’s about accepting that it will never be quite the same.  It’s about learning how to hold the broken pieces and getting to know the sharp edges so that they do less damage, so they hurt less when you touch them.
But mostly, it’s about the light.  Because the light that comes from it…the light that’s still there even when the outside is broken…well, it turns out it doesn’t really change at all.  The core, the heart of what’s on the inside, it doesn’t change.  And with the right set of circumstances, it’ll keep on shining.
Posted by Martha at 9:50 PM No comments:

Martha
"Don't compromise yourself. You're all you've got." ~Janis Joplin